Chess in Schools and Communities officially starts teaching in September 2010. However, one school, Ravenscroft Primary School in Newham, were lucky enough to be the pilot school in the scheme and started receiving chess lessons in June 2010 by WFM Sabrina Chevannes.

Please read about it in the report below:


The Newham Primary Schools Tournament was established only very recently by Alan Bright – a chess enthusiast who has been encouraging junior chess in the Newham area. He currently teaches in several schools in Newham and brings them together regularly for an interschool competition
.
Even though Chess in Schools and Communities was scheduled to start in September, we commenced lessons in one school – Ravenscroft Primary School, as a trial run. I began by teaching there once a week although the club had only been running for three weeks I thought it would be nice to get Ravenscroft involved just for fun. I took a team of six players – three children from year 6, two from year 5 and one from year 3. It was their first ever tournament and they were extremely excited.

The format of Newham Primary Schools Tournament was a five round swiss system and where possible, children from the same school avoided playing each other. The top 5 competitors’ scores in each team would count towards their school’s total, so using this system, it did not matter how many children came from each school. The schools competing were:

There were also a couple of individual players – Daniel and Demello who were just representing themselves as they really enjoy chess and wanted to join in.
The tournament took place on the afternoon of Thursday 8th July and was held at St. Luke’s Primary School in Canning Town. It was a hot day and after the walk over from their individual schools, the children were extremely thirsty and were provided with drinks and fruit. It was a nice social event and the children all interacted well.

Due to the late arrivals of Ravenscroft, The Hartley Centre and Demello, St. Luke’s and Daniel were paired off against each other in the first round and the others all received half point byes. In round 2, all players were included in the draw.
The round-by-round results were as follows: 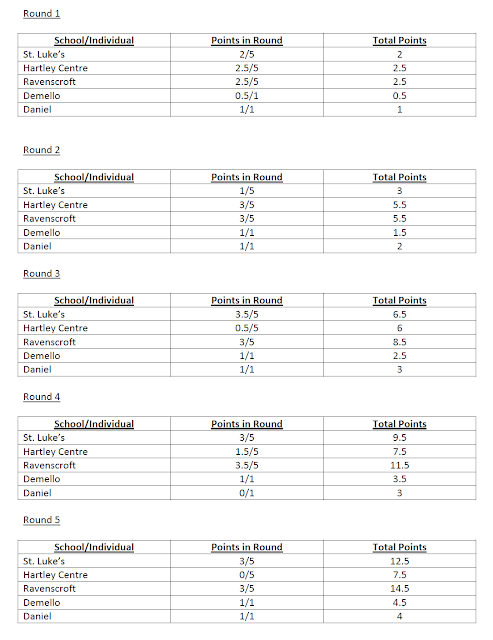 So after 5 rounds, Ravenscroft were the clear winners by 2 points, with a final score of 14.5 points. This was a great achievement for Ravenscroft as it was their first chess tournament both as a school and individuals, and as a result – their first trophy!!


Demello was the overall individual champion finishing on 4.5/5 points, winning all of his games after his 0.5 point bye in the first round.

I would like to thank Alan Bright for organising this tournament and St. Luke’s for being such great hosts.
Posted by Chess in Schools UK at 07:55